For the place of the same name, please see Orden, Nebraska. 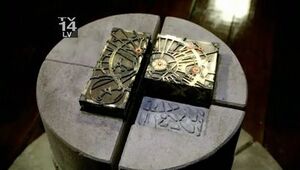 “There is a magic, an ancient and dangerous magic of immense power.”
―Zeddicus Zu'l Zorander[src]

The Boxes of Orden are a set of three magical boxes that are linked to the magic of life.

The boxes have special jeweled covers, which hide the true nature of the actual boxes themselves. Completely black, not just black in color, but black as in devoid of light, they are usually described as 'sucking all light' out of a room. The three boxes all have different properties and purposes as well. Although all three look identical, they are different.

First, the potential player (or someone ready to perform the rituals for him) must obtain at least one box, then he can put them in play. This causes a whole string of magic webs to occur. When the boxes are put into play, the deadly snake vine will begin to grow throughout the world. After that, the player has exactly 1 year to open a box, or else the magic will claim their life. There can be more than one player. If there is a new player, all previous players will be notified of the fact, and start their year to open a box anew.

Before a person can open a box, he must first remove its cover. The cover makes the box look golden, with jewels all over. After the cover is removed (which can be done by everyone, not only the player), the true box is revealed - a completely black color.

The boxes are simple to open, and once together one can be opened at any time. However, since the boxes are indistinguishable, identification of them, and thus the outcome, depends on complex magic rituals. These rituals are as much mathematical as they are magical, many things must be measured and calculated to precision, including astral positions and weather phenomena. Spells and formulae must be drawn within white sorcerer's sand around the boxes. A single individual requires the majority of two days to complete the rituals, and interruption is almost certainly fatal.

The outcome of what happens when a box is opened depends on which one it is. There are three possibilities: one box will kill the player, one box will destroy all life in the world, and the third will grant the player ultimate power over all life. Opening the third box entails a choice, as the magic of Orden shifts with intent. You can use the magic of life to help others, or to rule others.

Instructions for removing the covers, opening the boxes, and determining which box is which is in the Book of Counted Shadows. Each box casts a certain number of shadows; the Book explains that the number of shadows determines the contents of the box.

However it is later in the series revealed that 5 copies of the Book of Counted Shadows were created as a way to make it even more difficult to open the Boxes of Orden.  Also only 1 of the copies is a True copy with the others being delibrately False.

“So nervous will be the meddling half-wits to copy the key that should never be copied, that they will tremble in fear at what they have done and cast the shadow of the key among the bones, never to reveal that only one key was cut true.“

The Sword of Truth is the real key to opening the Boxes of Orden. A Seeker who can turn the blade of the Sword of Truth white with its magic of love and forgiveness can open a box by impaling it with the Sword.. The blade also helps them determine which box is which by turning black before the boxes that cause death and white before the box that grants ultimate command. In addition, this person cannot do so with hate in their heart, or they would be claimed by the power of Orden; the ancient wizards who created the power of Orden ensured that this fail safe would prevent an evil being becoming the master of all life.

The only known person who can use the boxes in this way is Richard Rahl.

The Boxes of Orden and Chainfire[]

Later on in the series, it is learned that the Boxes of Orden were created as a counter to the Chainfire spell. Chainfire has the ability to erase a person from all memory and evidence, and when cast has the potential to unravel reality through the endlessly increasing interventions it must make. Only the power of Orden is strong enough to right the immense amount of damage that Chainfire can cause.

For example, Richard Rahl, Lord of the D'Haran Empire, had to put the boxes into play and acquire the power of Orden in order to restore all the memories and evidence of his wife, Kahlan Amnell, the Mother Confessor, after Chainfire was cast on her by the Sisters of the Dark.

After the war, a great war started against Hannis Arc and Sulachan. Richard, infected with death's touch from the Hedge Maid, released the death's touch as a scream while covering his ear. The screams were used to kill Sulachan and destroyed the Omen Machine, and the Boxes of Orden were destroyed with it.

Legend of the Seeker[]

In Legend of the Seeker, the Boxes of Orden do not grant power over life and death, but rather a form of absolute authority, bending "the will of all to the will of one." When the magic of Orden is invoked, the possessor gains the ability to magically compel obedience to his spoken commands.

The magic of Orden can also be invoked much more easily in the television series. Rather than the complex magical ritual required in the books, one simply needs to place the boxes together, with two boxes widthwise and the third box lengthwise, so that each box touches every other box and their designs form a pattern of circles. As long as the boxes remain in this arrangement, the magic remain in effect. If the arrangement of boxes is disturbed, the magic ends. Opening a box is not even mentioned, and may be impossible.

The magic of Orden produces a corrupting effect on the minds of those who wield it, blurring the lines between justice and revenge in order to bring out a streak of cruelty in the possessor. Richard, Kahlan, and Zedd find a way to avoid this side-effect; a Confessor's touch, if administered more or less simultaneously with the acquisition of the magic of Orden, would preserve the compassion of the wielder by amplifying his ability to love. In turn, the power of Orden would allow the wielder to retain enough of his will to avoid becoming a mindless slave.

Additionally, in the television series the magic of Orden is one of three essential magics needed to time travel, as is seen in the episode "Reckoning" when Richard Cypher and Cara Mason are sent 58 years into the future (and back) through the combination of Orden, Confessor's touch, and Agiel.