“We are the final arbiters of truth. It is how we serve the people.”
―Kahlan Amnell 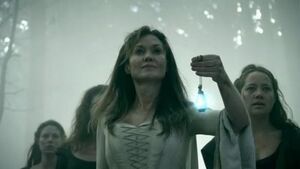 Confessors were an order of women first created during the Great War as a means of ascertaining the truth beyond doubt. They were created by Wizard Merritt using the Shrakiah, tools of great magical prowess. The first Confessor was Magda Searus. The magic of the Confessors destroyed the person touched by their power, in the sense that such a person would lose their free will, and would submit their lives to the Confessor.

The Confessors were created in an effort to ensure that truth could be ascertained during situations that called for it. The first Confessor, Magda Searus, volunteered to gain such experimental powers so as to personally discover the reasons behind the death of her husband, First Wizard Barracus, near to the conclusion of the Great War. Wizard Merrit's magical experiment on Magda Searus proved extremely successful, and as such an entire order of women was founded for the cultivation and protection of this amazing power. Their order became symbolic of truth as they were vested with the informal power to rule over the Midlands.

Many rulers tried to force Confessors under their command, which caused the Mother Confessor to dethrone these rulers and replace them with ones who understood that Confessors were independent individuals. Removing these rulers required a group of Confessors who would use their power to infiltrate a castle by confessing people of lower rank and working their way up until they reached the King or Queen. The dethroned rulers were forced to live as slaves to the Confessors in Aydindril. They were often brought along on a Confessor's travels as a reminder to everyone they met of a Confessor's power.

Unfortunately, the full consequences of the powers invested within a Confessor had not been foreseen. For reasons unknown, the Confessors' magic manifested itself differently within the male offspring of the original Confessors than in the females.

With great power came a great personal sacrifice for the remaining female confessors. A Confessor's power is always "on" and it is only because a Confessor is trained from birth to use her power "at will" that she does not Confess all around her. However, Confessors can lose control and confess people they do not intend to. Most notably, whenever Confessors made love with someone that caused a Confessor to enjoy great physical ecstasy, the Confessor lost her ability to control her power. Thus, a Confessor's loved one would lose their individuality after mating with a Confessor. After only one intimate experience, the mate becomes the Confessor's pawn and the mate loses any sense of individuality until the day the confessed person died.

Sadly, the most ethical of Confessors chose to never make love to the man she really loved out of deep respect for his individuality. Confessors, instead, would pick mates for procreation purposes while remaining emotionally close to their true soul mate.

After three thousand years in power, the Confessors would fall victim to the evil wizard Darken Rahl, who ordered his quads to hunt them down in their entirety and brutally murder them. Though throughout the reign of the Confessors they did little but sacrifice their lives for the people of the Midlands, these same people had come to hate and fear them due to rumors of the awful power at their disposal.

The one Confessor known to have escaped Rahl's plot was the Mother Confessor at the time, Kahlan Amnell, who proved instrumental in defeating him. Kahlan Amnell used her authority to dissolve the Midlands Alliance and ally the willing Midlands territories with the D'Haran Empire in interest of defending them all from the Imperial Order. Effectively, the rule of the Confessor order was ended, however it possible that Kahlan revived the Confessor line by having daughters with her husband, Richard Rahl.

“Don't let her touch you. She's deadlier than a poison dart.”
―A D'Haran soldier about a Confessor[src]

A Confessor's power was described as the power of love. If a Confessor could obtain contact with a person, she could release her power into that person at the speed of thought. After having been touched, a person lost his or her sense of self and would do anything and everything demanded by the Confessor.

One of the drawbacks of the Confessor's magic was the fact that after its application, the Confessor became physically weak and required time for recovery before her power and strength were regained. The speed at which she recovered as well as the level of control she had over one touched by her power determined the strength of her magic. In addition, Confessors with an exceptionally strong power were capable of tapping into the opposing portion of their magic, the Con Dar, also known as the "Blood Rage," which has its origin in vengeance and hate.

A Confessor's natural state is one in which her powers are active, so she must be trained to constantly hold them in or accidentally unleash the power. This meant that a Confessor could never marry for love.

Life of a Confessor[]

Confessors wore simple black dresses with square necklines, except for the Mother Confessor, who always wore white in order to show her power and authority. They had the longest hair in the Midlands, which indicated their unparalleled societal status. Their magic prevents them from cutting their hair themselves, causing them extreme pain if they try, although every Confessor eventually attempts to do so. Someone other than the Confessor herself must trim her hair when necessary.

A Confessor learned from a young age how to "hold in" her power, such that it was only released when she relaxed her grip on it. Confessors were educated meticulously in politics, history, warfare, languages, and magic.

Confessors held ranking within their order according to the strength of their power and the length of their recovery time. There was no jealousy or disloyalty among Confessors due to rank, and any Confessor would sacrifice herself without hesitation for one of higher rank.

Grown Confessors traveled the Midlands to take confessions. Sometimes the leaders of towns asked them to confess criminals in order to execute justice fully. Sometimes innocent convicts asked for a Confessor in order to prove their innocence. Otherwise Confessors investigated matters of justice according to their own designs, always looking to insure fairness and order. Confessors were always welcomed into any town or village she wished to enter, for refusing a Confessor was seen as a direct threat or even admission to guilt. Each Confessor traveled with a wizard, assigned to her in Aydindril, whose task was to protect her during the recovery period following confessions.

In addition to these duties, the cardinal law of the Confessors was, if the true Seeker arise, to protect him with her life. In Legend of the Seeker, one Confessor was assigned to accompany and personally protect the Seeker on his mission.

Confessors were often the cause of fear, and sometimes hate, among the people of the Midlands. Their power was a constant threat to anyone near them, and its magical nature made people suspicious. Their interference with local law and independence upset tradition. Their method of choosing mates also aroused intense animosity.

A Confessor could not love in the traditional sense. This was because if a Confessor was in the throes of passion, she would lose control of her power and consequently destroy her lover's self. When a Confessor wanted to bear a child, she would choose any man in the Midlands for her mate, all powers being unable to refuse her the man she chose. A Confessor's mate was usually just a person the Confessor believed would provide her a strong daughter, and oftentimes a person guilty of some injustice.

There existed only one way for a man to remain unaffected by the touch of a Confessor; should a man learn to love a Confessor unconditionally and have no foreknowledge that the Confessor's touch would have no effect upon him if he fully loves her, he would not be affected by the Confessor's power as he could not become more devoted to her. Of course, such a person would only be immune to the touch of the specific Confessor with whom they are in love. There are only two known men to have fulfilled these requirements: Richard Rahl, who was eventually able to marry his love, Kahlan Amnell; and Wizard Merrit, who after creating the first confessor Magda Searus eventually fell in love with her and married her. Madga Searus being the first confessor, she and Wizard Merrit obviously had no knowledge of this loophole to the Confessor's touch, and due to this it became something very few knew.