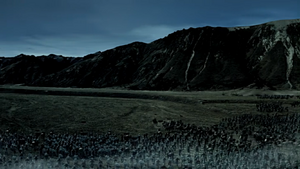 The Army of the D’Haran Empire is the army consisting of the military forces from D’Hara and all the lands of the Midlands that have willingly come under the rule of the Lord Rahl, in the hope of defeating Emperor Jagang and the Imperial Order. It can be seen as the successor of the People’s Peace Army. After the implementing of the D’Haran Empire, making a D’Haran Empire Army. When it came time for the final battle, the Lord Rahl came to the encampment to disperse the army, he gave them a new purpose, and a new name, in a small part thanks to Shota the Witchwoman, Phantom D’Haran Legions.

Though the terms head of state and commander-in-chief are never used to refer to the Lord Rahl, they accurately describe the power he possesses. He is the ruler of the D’Haran Empire and the supreme commander of all military forces that come under his banner.

The D’Haran Army is often directed by a Commanding General, in the absence of the Lord Rahl, but should the Lord Rahl suddenly appear on the field, his orders prevail. Since coming to the throne of D'Hara, Richard Rahl has also made it clear that his wife, the Mother Confessor Kahlan Amnell, is his equal and outranks all other military personnel and dignitaries.

The highest ranking general of the D'Haran Army outranks all other officers while on the field, second only to the Lord Rahl and Mother Confessor. However, when at the Palace during peace time, the Commander General of the First File is his superior.

Sisters of the Light & the D’Haran Gifted Forces Edit

An old D’Haran proverb describes the relationship between the Lord Rahl and the D’Haran Army. It says that the D’Haran forces will be the “steel against the steel”, while the Lord Rahl will be the “magic against the magic”. Due to being rather clueless in the ways of magic, it soon became clear that Richard would not be able to fulfill this duty himself. Therefore his allies, the Sisters of the Light, under the leadership of their newly named Prelate, Richard’s close friend Verna Sauventreen, step in to protect the D’Haran Army from the dangerous magic conjured by the Imperial Order’s gifted.

The Sisters become extremely adept at causing havoc for the Imperial Order troops and keeping the enemy gifted constantly on the watch for whatever dangerous magic the Sisters might throw at them. The Sisters’ skill at using their gift for war increases dramatically after being tutored by First Wizard Zeddicus Zu’l Zorander on the matter.

Independent gifted like Adie and Zedd himself also play a dramatic role in magical warfare. Each has a large knowledge base on many matters of the gift, particularly warfare, and have been commented on being rather skilled at causing the enemy harm on several occasions. They also help to pass their knowledge on to the Sisters of the Light, who had spent their lives helping others, not causing them harm.

Tactics against the Imperial OrderEdit

† indicates confirmed dead, as of Phantom.

Retrieved from "https://sot.fandom.com/wiki/D%27Haran_Army?oldid=24958"
Community content is available under CC-BY-SA unless otherwise noted.