Sword of Truth Wiki
Register
Don't have an account?
Sign In
Advertisement
in: Characters, People From D'Hara, People From the New World,
and 2 more

“I am relentless. I may not be as cruel as some of the others, but I enjoy breaking a man more than any of them. I love hurting my pets more than anything else in life. I live to do it. I don't give up, I don't tire of it, and I don't ease up. Ever.”
―Denna[src]

Denna was a Mord-Sith under the rule of Darken Rahl. Denna was considered the best of all the Mord-Sith at capturing and training men into obedient pets, and as such, was assigned by Darken Rahl to break Richard Cypher. However, Denna fell in love with Richard, and sacrificed her life to free him by allowing him to kill her.

“We all have our own little bits of insanity. Some more than others. My life was a darkness of it. ”
―Denna[src]

Denna was taken to become a Mord-Sith at a young age. She was chosen, like all potential Mord-Sith, for being an uncommonly kindhearted and attractive girl.

Denna was almost deemed a failure and killed because her training took so long.

The training of a Mord-Sith occurs in three parts. In the first, the girl is broken in the same way Mord-Sith break all their pets —prolonged mental and physical torture with magic and the Agiel — in order to break her spirit. In the second, the child is forced to watch as her mother is broken and killed by another Mord-Sith, or her Mord-Sith trainer, with the aim of ridding her of empathy and compassion. Lastly, in the third, the girl must train and kill her own father to purge the fear of hurting another, and in turn, develop the Mord-Sith trait of finding pleasure in hurting men.

Denna's mother was strong, and took considerable time to break, in trying to save her daughter from becoming a monster she actually had the opposite effect. Making it harder for Denna to give in and in turn insuring the process would be more painful. Denna was eventually trained by Darken Rahl himself, an event that also resulted in Denna being left unable to bear children.

As a fully fledged Mord-Sith, Denna was given her own Agiel, as was custom. From then on Denna only wore the skintight leather outfits of the Mord-Sith. As a result of her flawless methods of breaking even the strongest men into obedient pets, Denna was considered the most talented of all Mord-Sith. Over the years she would train countless of men, from rebels, dissidents, political opponents of Darken Rahl, and other men she wanted to train herself. All of them would break after a short time in her capitivity, due to the pain of the Agiel as well as Denna's talents of keeping men emasculated and needing to please her. She also favored taking the most handsome pets in her capitivity as her mates, using them as sex toys.

“I want you to learn. Learn that I can do whatever I want, and there is no way for you to stop me. You must learn that you are totally helpless, and that if you enjoy any time without pain, it is only because I choose it. Not you.”
―Denna, on training Richard[src]

Denna captured Richard Rahl near Tamarang with help of the magician and artist James, shortly after Richard had stolen the final box of Orden and sent it to Westland. Denna was ordered by Darken Rahl to train and break Richard because she was a Mord-Sith who enjoyed administering pain to her pets, and never grew tired of it. She captured the magic of his Sword of Truth when Richard tried to use it against her, and used it from then on to cause him excruciating pain if he ever did anything that she did not command him to do. There was nothing he could do to fight back, or resist her. As such, he was utterly helpless to stop her from training him with the Agiel. She forced him to think sexual thoughts of her to keep the pain away, conditioning him to become openly lusting for her. Meanwhile she brutally tortured him in order to break him mentally as well as physically.

Denna subjected Richard to all forms of training a Mord-Sith could possibly give her pet, including putting her Agiel in his ear. She used the Agiel to train him, and used the pain of the magic to keep him subservient to her wishes. In order to train him, she kept him naked, collared, chained up, unfed, and sleep deprived. He was also forced to say devotion to her and Darken Rahl, which he did without hesitation to avoid the pain of the Agiel. When he failed to please her he was given a more painful training session.

After a couple of days of intense training, Richard's spirit unsurprisingly. He finally became her pet, willing to do whatever she pleased in order to not be hurt. Denna killed Richard many times over the course of his training, only to bring him back with the Breath of Life every time. Despite the fact that he partitioned his mind, Richard always had a hint of madness in him after his time with Denna.

Denna was touched by the compassion and understanding that Richard showed her when she told him how she had been made into a Mord-Sith, and also by the care he gave her when she was beaten by Darken Rahl. Denna took Richard for her mate, and protected him from the brutality of the Mord-Sith Constance. Eventually, Denna fell in love with Richard and wished to be free of the curse of Mord-Sith. She therefore allowed him to kill her by turning the blade of the Sword of Truth white with forgiveness. She bequeathed her Agiel to Richard before dying; he (and subsequently his wife, Kahlan Amnell) wore it around his neck as a gesture of respect and remembrance.

“One way or another, you will always be in my heart.”
―Richard, to Denna[src]

After the second tearing of the veil of the underworld, Denna returned as a spirit to save Richard from both his own gift and from the mark of the Keeper placed on him by Darken Rahl. She removed the mark by taking it on herself, meaning that she will suffer for eternity at the hands of the Keeper of the underworld. However, her act of sacrifice on Richard's behalf "disgusted" the Keeper and he refused to take her, thus allowing her to join the ranks of the good spirits. When Richard and Kahlan were later separated and sought to know if the other is alright, Denna appeared and caused a rift in time to briefly reunite the lovers.

After Richard entered the Temple of the Winds, he was visited by many spirits. Denna was one of them. She helped Richard finally decide to leave the temple and return to world of the living. She did this by forcing Richard to remember the events and emotions of what it was like to be under her control as the pet of a Mord-Sith, so he could understand that pain may be an expression of love and the comfort one in a dark place can gain from the smallest cares.

Denna appeared as Richard's guide of the Underworld, when he traveled there to obtain what he needed to use the power of Orden to reverse the chainfire spell and to vanquish the beast, sent by Jagang's Sisters of the Dark.

The television portrayal of Denna is slightly different from the Sword of Truth books. Denna is portrayed as having blond hair while the books state she had auburn hair, and what took 3 weeks in the book version was condensed in the television episode to happen within two days. The main difference between the two versions was that unlike the book incarnation, Denna did not die to safeguard Richard even though, like her book incarnation, she was openly attracted to him. Instead, Richard killed her to save Kahlan, whom Denna had also caught and intended to train. Denna was revived by fellow Mord-Sith Constance with the "Breath of Life" a form used to retrieve a person from the edge of death. She later reappeared to capture Richard's half sister Jennsen, before being allowed to flee with her life by Richard; from him and Darken Rahl. She again appeared in season two, taking the compass and later capturing Zedd. While in captivity, Zedd tried to convince Denna that she could be a better person. Just as it seemed Zedd was getting through to Denna, Cara and Kahlan caught up with them and Cara killed Denna with an arrow in the back.

Actress Jessica Marais portrayed Denna in the episode of the same title. She later reprised the role for the episodes "Bloodline", "Resurrection" and "Light". 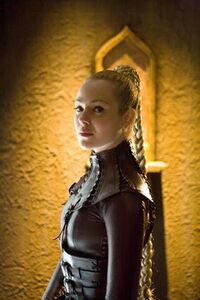 Denna is described as a tall, fit and breathtakingly attractive young woman. She had hard, piercing brown eyes. Her long, thick auburn hair was pulled back into a tight braid, a mark of her profession as Mord-Sith. She always wore the skintight red leather catsuit of the Mord-Sith, which revealed the exquisite shape of her athletic body. Denna was never without her Agiel dangling from the gold chain in her wrist.

She was considered special by Darken Rahl as she was so difficult to break. When she first meets Richard, she is completely twisted. She finds arousal in hurting Richard and sometimes held back out of a twisted caring for him and other times felt she was sharing her feelings by doing her worst to Richard. In the end she shows compassion, love and loyalty when she lets Richard kill her so he can escape.

Legend of the Seeker Episodes[]