Faith of the Fallen

Faith of the Fallen by Terry Goodkind is the sixth book in the Sword of Truth series. It was first released on August 22, 2000, and followed in paperback on November 15, 2001. It follows Soul of the Fire and is followed by Pillars of Creation.

Faith of the Fallen begins right where Soul of the Fire leaves off. Richard is taking Cara and an injured Kahlan to the high mountains of his homeland, Westland. Richard is so shaken by the attack on his wife that he believes that he cannot win against Emperor Jagang until the people themselves want to fight for freedom. Because of this mindset, Richard isolates himself in the woods and devotes himself to taking care of Kahlan, refusing to lead the D'Haran Empire, insisting that further resistance can only result in the loss of more lives.

After Kahlan has made a significant recovery, the trio is reintroduced to Nicci, a Sister of the Dark who was one of Richard’s instructors at the Palace of the Prophets. She provides great insight into the goals of the Order and about the Dream Walker, Jagang himself. Nicci believes fully in the goal of the Order: to have everyone live in equality by eradicating magic.

Nicci's goal is to capture Richard, something that she accomplishes by using the rare and difficult maternity spell on Kahlan. Anything physical that happens to Nicci, happens to Kahlan, Now that the key to keeping Kahlan safe is keeping Nicci safe, Richard is forced to go with Nicci into the Old World, leaving behind Kahlan, Cara, and the Sword of Truth.

Kahlan and Cara leave Westland in order to aid the fight against Jagang, despite Richard's earlier objections to such a plan. They seek help from Zedd and Sister Verna. As the Mother Confessor and wife of Lord Rahl, Kahlan takes command of the combined armies of D'Hara and the Midlands in a desperate attempt to halt the Imperial Order's advance into the New World.

While Kahlan and Richard's friends do battle in the New World, Nicci forces Richard to behave as if they are ordinary people as well as husband and wife. Richard manages to get them to the Old World capital Altur'Rang, doing whatever he can to make ends meet for himself and Nicci. Nicci, expecting Richard to finally understand how oppressive life for the poor in the Old World can be and how the Imperial Order provides relief, begins to understand how wrong she and the Order have been all these years when Richard rises above the hardships placed in his path and independently does what is needed to survive. Richard freely helps others and shows that one can take pride in his work, himself, and his surroundings.The people take notice and soon find that it is only they who can make their lives better. Soon, people find purpose their lives and change their outlook for the better.

As a punishment for unnamed crimes, Richard is ordered to carve a massive stone statue for Liberty Square. When Richard reveals the statue, however, it is not the design given to him by Brother Narev; it is a tribute to the value and glory of mankind when free, infused with Richard's Han to make it truly inspirational. Richard names the statue Life. When Nicci sees it, she has a revelation. The reason why she became a Sister of the Dark in the first place was because she believed that she was not worthy of life; Richard's statue shows her that everyone is worthy of life, and that her strength is hers alone.

When Brother Narev orders Richard to destroy his own statue, the people of Altur'Rang rise up in rebellion and attack the Imperial Order. Kahlan, having heard of Richard's plight, issues orders to her troops and journeys to Altur'Rang with Cara to rescue him. They arrive just in time for the uprising. When the dust settles, Richard, Kahlan, and Cara are reunited. Nicci pledges fealty to Richard and Kahlan, having realized the truth of their philosophy. The people of Altur'Rang have a new spirit, having tasted freedom and understanding the value of life.

The only sovereign you can allow to rule you is reason

Faith of the Fallen has a total of 71 chapters.

Here is a list of all the characters who appear in Faith of the Fallen:

To Russell Galen, my first true fan, for his steadfast faith in me 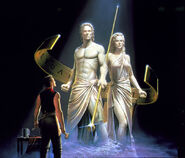