Sword of Truth Wiki
Register
Don't have an account?
Sign In
Advertisement
in: Spells, Magic and the Gift 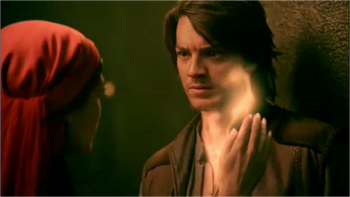 Han was the power of life that was, according to the Sisters of the Light, encased inside mankind by the hand of the Creator. Humans used their Han when they directed their mind to do anything. Those who were gifted wizards or sorceresses were able to use their Han to perform magic. Han could also be taken by having the person relinquish it or having a Sister kill them with a Dacra to take it.

A wizard or sorceress was able to direct their Han to do things outside their body. A normal person used their Han when they moved, talked and other such everyday things, but their Han was otherwise useless. There were several kinds of people capable of using their Han to direct certain abilities outside of their body, however sorceresses and wizards were the most powerful.

Sorceresses were formidable women, capable of exceptional feats. However, they were only capable of some of what a wizard is. The male Han was naturally stronger than the female and it was thought to be impossible to absorb the Han of the opposite sex. The Sisters of the Light knew of techniques to absorb the Han of other females; Sister Verna absorbed the gifts of the two Sisters who gave their lives on their journey together. When on missions, Sisters gathered young wizards to be trained in their gift. They brought these young children (better at this age because of obedience levels throughout one's life) to the Palace of the Prophets. The Han encased inside the gifted caused excruciatingly painful headaches if the individual was not trained. Eventually, these headaches would kill the individual who possessed the Han if it was powerful enough. Only a Rada'Han, or training from another wizard, was able to prevent the headaches from becoming fatal.

The Keeper of the Underworld knew the secret of how a female could absorb the male Han and taught this to the Sisters of the Dark. Using a quillion, the Dark Sisters were able to gain the Han of a wizard, as well as Subtractive Magic.