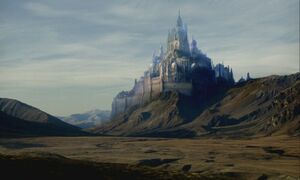 The People's Palace is the home of the Lord Rahl and is effectively the capital of D'Hara.

The Palace is a place of exquisite beauty that masks a much deeper meaning. The halls of the Palace tend to be confusing because they form the glyphs of a spell. The People's Palace is in itself a huge Power Spell, meant to diminish the power of those with the gift and enhance the power of a Rahl. It does so very effectively and even the most powerful sorceresses and wizards will soon have next to no power at their disposal after a short time in the Palace.

Being the capital of D'Hara, many nobles call the Palace home, though they are subject to the law of Lord Rahl. Mord-Sith and soldiers patrol the halls and are a very effective means of warding off potential trouble.

At the center of the Palace, there is a room called the Garden of Life. It is a place where the power of magic is heightened. In fact, it was built for the specific purpose of using the gift, along with opening one of the boxes of Orden.

The People's Palace is one of the largest buildings (if not the largest) in the known world and is the capital of D'Hara. An entire city lives within the walls of the palace. In the lowest portions of the palace, near the tomb of Panis Rahl, long corridors of polished granite are lit by torches. The levels are connected by spiral staircases of white stone. Above the lowest levels are more corridors with windows that let light in (or torchlight out), but it still smells damp and stale. Several levels up, the air regains its freshness and small tables of lustrous wood are stationed at intervals along the halls that hold vases with bouquets of fresh flowers that lends a light fragrance to the room.The Garden of Life is in the center of the People's Palace. It is bordered by a labyrinth of rooms covered in dark-brown oak panels. The wood panels gleam in the firelight from brick hearths, with candles and lamps set about on heavy tables in the larger rooms. A few of the rooms are plastered and painted with scenes of the D'Haran countryside, sheep, forests and fields, game and children. Trophies of the hunt hang on the walls of some, heads and antlers of every sort of beast, lit bright by the flames. Some have windows at the end of the room, made up of small panes and up at the top, that stands twice the height of a man and looks down on the D'Haran countryside. The entrance to these rooms is often set apart by a pair of heavy doors with a scene of hillsides and forests carved in relief, with iron rings that open smooth and silently. In one of the two-story outer rooms, books line two walls, an immense fireplace warms the room, and an old leather-bound book sits on a pedestal. Darken Rahl and his father, Panis Rahl, ruled from the People's Palace. The Garden of Life is where Darken Rahl performed most of his magical rituals, including traveling to the underworld and opening the boxes of Orden.