Wizard's First Rule by Terry Goodkind is the first book in the Sword of Truth series. It was first released on August 15, 1994, and has been re-released multiple times, with numerous covers. It is followed by Stone of Tears.

The primary protagonist in Wizard’s First Rule is Richard Cypher, a young woods guide. Richard lives in an area of the world known as Westland, which is the only part of the world that at the time contained no magic. Westland is separated from the other lands by a dangerous magical boundary that prevents anyone without powerful magic from passing through it. On the other side of the boundary lie many sovereign nations, jointly known as the Midlands, and the empire of D'Hara. Richard works as a woods guide leading important political figures and travelers through dangerous forests, while his brother's interests lie entirely in politics.

Richard is naturally compelled to investigate the mysterious murder of his father, George Cypher, when he happens upon a woman named Kahlan Amnell, whom he helps keep alive as she is being hunted by a group of four men known as a quad.

After saving Kahlan’s life, it is revealed that Kahlan has somehow come through the boundary and is now searching for the First Wizard, who is rumored to have crossed into Westland after the creation of the boundaries. Richard feels that this woman is in need of protection and takes her to the only man he can trust, his best friend and mentor, Zedd.

Richard discovers that this close friend of his has kept many secrets from him for his entire life; Zedd is not the simple man that Richard had presumed him to be, but rather the wizard for whom Kahlan is looking.

Kahlan tells him of the events taking place on the other side of the boundary. An evil leader called Darken Rahl is leading his army against the Midlands. At the same time, Zedd comes to the decision that Richard is the Seeker of Truth and gives him the Sword of Truth. They begin their journey together to stop Darken Rahl and prevent him from opening the boxes of Orden, magical devices which can give absolute power over life and death.

However, due to a series of events, Richard and Kahlan are forced to cross the boundary alone and go on to the village of the Mud People in hopes of finding out where the third box of Orden is hidden. From there, they learn that only the witch woman, Shota, in Agaden Reach, has the power to reveal to them the location of the last box of Orden.

The story continues as it follows the team of Richard, Kahlan, Zedd, and Chase as they attempt to collect one of the mysterious boxes of Orden and prevent Darken Rahl from gaining absolute power.

People are stupid. They can be made to believe any lie because either they want to believe it's true or because they are afraid it's true.

Wizard's First Rule has a total of 49 chapters.

The cover art done by Keith Parkinson for the first edition cover of Wizard's First Rule (see below) depicts Richard and Kahlan in a scene whose specifics have been highly debated. It has been suggested that it is an adaption of the scene where Richard and Kahlan meet, Parkinson having depicted the occurrence beside a waterfall instead of on a mountain path to illustrate the importance of the moment. It has also been speculated that the scene is Richard's dream of taking Kahlan to see all of the special places he has discovered in the Hartland woods.

The composition of Parkinson's painting is cleverly done. Its positioning on the cover of the book makes the waterfall the halfway line, while Richard's head is the center of the full painting.

Parkinson's painting actually makes an appearance in the books themselves, being a piece of artwork in the People's Palace briefly mentioned in Confessor.

Cover based on Legend of the Seeker 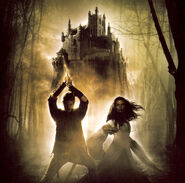 Cover art based on Legend of the Seeker